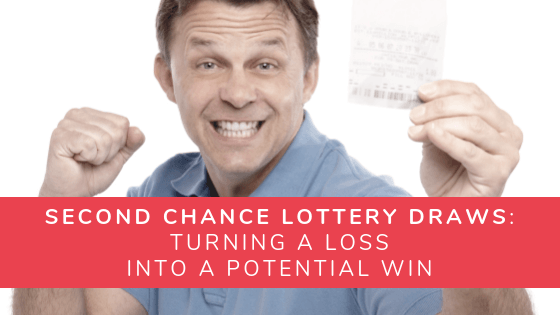 What are Second Chance Draws?

Though it may feel like it, losing in the lottery is not the end of the world.

But, if you’re in the right place and the right time, you can end up being a winner after having a losing ticket in some lotteries. How? Read on to find out more information!

Second chance draws allow players to enter their losing lottery tickets into a new draw for another shot at winning.

Not all games have second chance draws, and those that do can offer monetary prizes as well as brand-new cars, football tickets, gift cards, and vacation packages for you to win. All losing players are welcome to try their luck one more time, so check the entry deadline, play responsibly and with caution, and who knows, maybe your numbers will turn to be winning numbers after all.

Who Can Play in Second Chance Draws?

Every loser is eligible to play! Each second chance draw differs among various games, but one thing is the same across the board: it’s for losers only!

Okay, that sounds a tad harsh. But seriously, how many losing tickets and scratchers are littering your car or purse?

We can’t all be like Jane Park, a young lottery winner who won a huge jackpot on her very first try at the age of 17 (especially that, for some lotteries, you must be 18 years old to enter). So, check out the lottery site where you bought your ticket to see if they offer the second chance draw and check your trash for that ticket you threw out! Maybe the prize is still waiting and you still have a chance of winning.

What Are the Odds of Winning?

The odds of winning in a second chance drawing can vary, depending on the program.

This is mainly due to the fluctuating number of players. For example, the main game in an Oregon lottery scratcher offered a 1 in 120,000 chances of winning the $100,000 prize, but in the second chance game, the odds of winning the same amount were only 1 in 18,000—simply because only 18,000 people entered the draw.

How to Play Second Chance Draws

The specifics of second chance programs differ per lottery. They range from entering your losing ticket online, mailing it in, or physically dropping it off at the lottery office. There also are games, such as California State Lottery and the Massachusetts 2nd Chance, that offer mobile apps that allow players to scan the ticket, instead of entering them manually!

But if you don’t live in these states, you are at a distinct disadvantage.

If that's the case, it is when playing on the online lottery website is a big plus!

Some lotteries offer automatic second chance draws, like LottoLand, for example. The caveat is that some lottery sites only allow you to bet on the outcome of games, so if you prefer playing in official games, you have to do your homework.

Check out your lottery's official website to find more information, see the entry deadline and check if you must be 18 years old to play, what are the prizes, and how many tickets you can enter.

So visit the official website of your lottery to find all the necessary information.

Second chance lottery draws aren’t as common in Europe as they are in the U.S. They exist but some have different sets of rules from their U.S. counterparts.

For example, only those who have matched 2 main numbers get free entry to the Lucky Dip, the second chance draw of UK’s Lotto game. Here are three popular games that offer second chances:

Australia’s biggest lottery operator, the Lott, offers the Scratch eClub, a second chance draw for players who own non-winning Scratch-It cards. Regular draws are held every month, while select players are automatically enrolled into separate special birthday draws. So far, this seems to be the only second chance drawing being offered in the country.

Of course! Second chance draws offer losing tickets another shot at winning big prizes. You already paid for the ticket, so why not take that extra chance of winning a prize? Play responsibly, check the entry deadline and who knows, maybe your losing number will become winning numbers.

Turn your lottery luck around!