In the US Powerball lottery, the odds of matching all five of your numbers plus the bonus number is 1 in 292,201,338. Simply put, that’s a pretty tall order. Now, imagine those very same winning numbers being picked—by machines designed specifically to ensure randomization, no less—for separate drawings. Sure, one, two, or maybe three numbers from the previous draw could be picked again—but, all five numbers and the Powerball being drawn twice? It’s a highly unlikely scenario.

That said, it’s not impossible. In fact, all over the world, there have been numerous records of lotteries drawing the same winning numbers twice. Sometimes, the events would be years apart, but there have been several cases where the same winning numbers were drawn only weeks apart or, heck, even hours apart! Not convinced? Below, I take a closer look at some of those events.

Beating a One in Four Trillion Chance

It was on October 2010 when three lucky winners of the Israel lottery each took home £666,000. Another 100 or so players, meanwhile, took home smaller prizes. At first it seemed like any other draw—but soon, viewers of the live TV broadcast realized that the numbers were strangely familiar.

The winning numbers were 36-33-32-26-14-13 with 2 as the “strong” number—which was the same as the ones drawn three weeks prior, during the September 21 draw. Yitzhak Melechson, a University of Tel Aviv statistics professor, said that such an occurrence was a once in 10,000 years event. Statistically speaking, by drawing the same numbers within a month of each other, the Israel lottery just beat a 1 in 4 trillion chance!

There are some who questioned the legitimacy of the draws though—and they’re not the first ones to do so.

Lottery players weren’t the only ones concerned about possible illegal activities—even the Bulgarian authorities were skeptical of the draw’s legitimacy. So, they launched an investigation in the hopes of unearthing the truth. Their findings? Exactly what the lottery organizers have been saying all along: it was nothing more than a freak coincidence.

It’s an understandable concern though. Any time the same exact numbers are drawn, it’s easy to wonder whether someone is pulling the strings behind the scenes. Is there an accomplice just waiting to cash in multiple times? While there have been cases of rigged lottery games, repeat winning numbers don’t necessarily mean shenanigans are afoot.

On the same year, the New York State Lottery experienced something bizarre—the same winning numbers were drawn on the same day! For those who bet on the 8-0-5-6 winning numbers, a $5,000 prize was waiting for them. 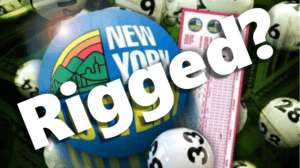 It also meant that for those who bet on both draws using the same numbers, winners came home $10,000 richer that day. But, could the results have been fixed? No—it wasn’t rigged. The numbers were drawn by two separate machines using two different sets of balls.

In April 2020, Joe B. won $1 million twice in one day playing Powerball in Colorado. You read that right, twice in one day! While we're not certain it's likely he played the same numbers every time and got lucky this time around.

Same Winning Numbers are Not Unheard Of

According to Stephen Allensworth, former lotto columnist at the Daily News, it’s not unheard of; drawing the same numbers happen more frequently than what the odds suggest. On January 14, 2009, for example, the numbers drawn for the midday drawing of the New York State Lottery was 4824, while the numbers for the evening draw was 8424.

It’s easy to think that, whenever something incredibly unlikely occurs in a lottery—such as the same winning numbers being drawn twice—there’s something shady going on behind the scenes. Some measure of cynicism is to be expected, especially since the industry has its fair share of scams and/or troublemakers.

That said, it doesn’t mean that momentous events like these are impossible. It’s unlikey, yes—but not out of the realm of possibility. With how many lottery draws there are in a given year, some winning numbers are just bound to be drawn twice. And hey, this is good news if you’re the type who loves to play the same numbers for every draw!