4 Lottery Scandals that Rocked the Industry

The lottery industry has its fair share of scandals—which isn’t really a surprise. It may be a big industry with numerous protections in place, but it’s not perfect. From stealing, to fixing results, and even exploiting loopholes, people will do anything to cheat the lottery and fatten their bank accounts—risking everything including jail time. Read on to learn about some of the biggest lottery scandals that rocked the industry!

This is probably the most infamous lottery scandal of all time—not because of how much money masterminds Nick Perry and his cohorts, the Maragos brothers, walked away with, but because of how crafty they were. What they did was so impressive that Hollywood took notice and made a movie about them, Lucky Numbers, starring John Travolta and Lisa Kudrow. So, what did they do to merit this kind of attention?

Nick Perry was a radio personality and host of Pittsburgh’s nightly televised lottery drawing on WTAE Channel 4 in the 70’s and 80’s. Along with brothers Peter and Jack Maragos, they concocted a plan that would use weighted lottery balls. The idea was simple, but quite clever: they would add just enough weight to the balls, except for 4’s and 6’s, to limit the numbers that would be drawn by the lotto machine. Doing so would leave them with only 8 possible number combinations: 444, 446, 464, 466, 644, 646, 664, and 666.

To accomplish this, Perry and his cohorts needed the help of an expert. They turned to local lettering expert and WTAE art director Joseph Bock for help with creating the weighted balls. Bock used ping-pong balls and experimented with various powders and substances until he settled on latex paint. But it wasn’t as simple as slathering the balls with a coat of paint and calling it a day—Bock had to determine the precise amount to put so that the weighted balls could be lifted from the bottom of the machine, but not enough to be completely sucked out by the vacuum tube. Eventually, Bock got the right formula.

With that hurdle out of the way, all Perry had to do was to get access to the lottery machines and the ping-pong balls. Easier said than done, right? Not for Perry. Remember, he was the TV host of the three-ball Philadelphia lottery draw. Of course, he still needed help—which lottery official Edward Plevel and WTAE stagehand Fred Luman happily provided. Plevel left the machine and balls unguarded, while Luman switched the balls before and after the drawing. Bock would later burn the balls in his studio a half-hour after the drawing. 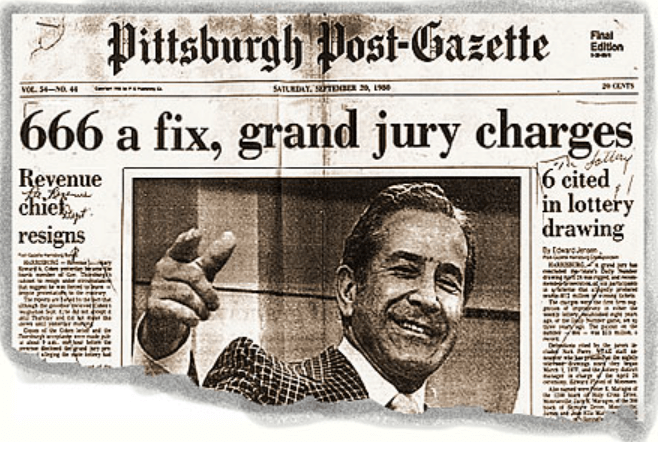 The draw went according to plan—one of the 8 possible combinations, 666, came up—but because of unusual betting patterns detected by authorities and local bookmakers, plus an anonymous tip, Perry and his cohorts were caught red-handed. Perry and his accomplices were arrested, and the winnings were never paid out, with Perry maintaining his innocence ‘til the day he passed away in 2003.

Fast forward to 2017 and to the world of computer fraud for our next scandal. In plain sight, programmer Eddie Tipton gamed the system he helped design. No ball tampering for him!

Eddie Tipton worked as the security director of the Multi-State Lottery Association (MUSL), a nonprofit agency that oversees numerous lotteries all over the United States. As you can imagine, this position granted him access to places no ordinary civilian could go—one of which was the Iowa Lottery’s highly secured “Draw Room.”

It was here where Tipton, with a background in IT and expertise in cyber security, would tamper with the room’s CCTV system so that it would only record roughly a second of footage per minute. With that out of the way, Tipton installed a self-destructing root-kit program that would essentially allow him to predict the numbers of certain lottery games without a single trace.

With the help of his brother Tommy and close friend, Texas businessman Robert Rhodes, for years, the trio enriched themselves without anyone noticing. From 2005-2011, in Colorado, Wisconsin, Kansas, Iowa and Oklahoma, they pocketed the winnings. It would’ve been the perfect crime too, had it not been for Eddie’s slip-up. What eventually made authorities suspicious was when, in December 2010, a lawyer tried to claim the Hot Lotto jackpot—worth $16.5 million—on behalf of a corporation registered in Belize.

Warning bells went off when the trust that the lawyer represented withdrew the claim when asked to identify the original ticket purchaser (Iowa doesn’t allow anonymity for lottery winners). It turned out that none other than Eddie Tipton himself bought that winning ticket—and he was caught on security footage!

It was the beginning of the end for Tipton, but he didn’t give up without a fight. For more than two years of adamantly denying his involvement in the crime—even going so far as claiming that the Hot Lotto lottery was pinning everything on him because they were desperate—Eddie Tipton finally pleaded guilty in 2017. He currently faces up to 25 years in prison.

A Scam that Came with a Scandal

Here’s a scam that could have come straight out of a British detective series. Calling Inspector Morse, Inspector Lewis and the Happy Valley’s Sergeant Cawood! This isn’t about insiders (although there is some element of an inside man) taking advantage of their position to rig lottery results—it’s more about a broken system that inadvertently allowed someone to take advantage. And ultimately ended up in tragedy.

In 2009, after no one came forward to claim the £2.5 million National Lottery prize in Britain, Edward Putman, a convicted rapist, was allegedly tipped off about the exact details of the winning ticket by Giles Knibbs, his contact working at Camelot’s fraud detection department which is the operator of the National Lottery.

Putman went to a shop, purchased a ticket, and proceeded to carefully scratch off the barcode and date. The barmy part? That’s all Putman did! He didn’t even attempt to replace the barcode or dates to make the ticket look authentic.

The even crazier part? Dame Dianne Thompson, the Camelot chief executive at the time, is said to have personally called Putman right before authorizing the release of the £2.5million payout without even questioning why the winning ticket looked like it was deliberately tampered with.

Putman was later arrested but was let go due to lack of evidence. It was reported that Camelot itself was partly to blame for his release; they claim to have lost the “winning” ticket. It wasn’t much of a surprise when the Gambling Commission slapped Camelot with a hefty £3 million fine for authorizing the payout in the first place.

It doesn’t end here. Putnam had the audacity to apply for welfare benefits after pocketing his winnings but was denied in 2012. And in 2015, Giles Knibbs committed suicide amidst allegations of the lottery fraud.

Edward Putman might have gotten off without so much as a slap on the wrist in Britain, but if he were in China, things would be a lot different. Just ask Zhao Liqun, who is currently facing a life sentence for using a loophole he discovered to his advantage.

Liqun ran three lottery stalls in the province of Anhan in China, but was also an avid lottery player himself. And like any other lottery player, he was trying to find ways to easily secure a win. One day, he succeeded. He found out that after the winning numbers were drawn, there was a five-minute window wherein anyone can still choose numbers and purchase a legitimate lottery ticket (this time containing the winning numbers).

It was a pretty clever scheme, and Liqun would have gotten away with it if only he learned the importance of quitting while he was ahead. He took advantage of this trick a total of three times, raking in a total of $3.76 million or 28 million yuan.

Liqun asked friends and family to cash in the succeeding tickets—most likely because he was trying to hide his involvement. Unfortunately for him, authorities soon caught on to the scheme. Not only was he imprisoned for life—a sentence viewed upon by many as being too harsh—all of his property was also confiscated.