Lotto Dominator: The Secrets Behind the Formula

In this article, we’ll discuss Lotto Dominator – a popular eBook that’s been generating quite a bit of buzz especially among lottery enthusiasts. 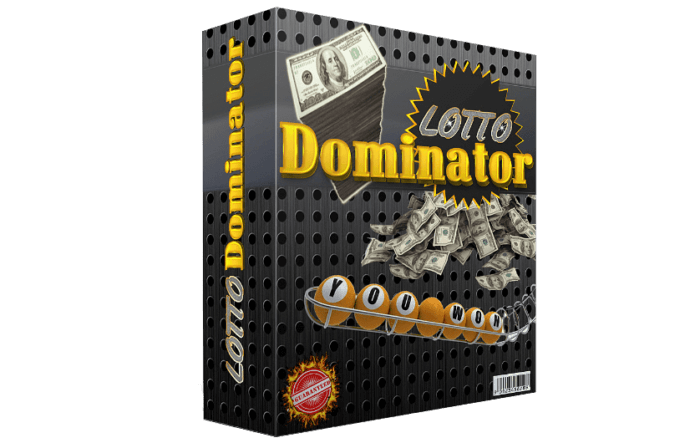 We got our hands on a copy to give you an accurate review of the product and see if it’s worth your money. We’ll also show you how to get a copy for yourself below.

Towards the end, you'll also find other software that bear an uncanny resemblance to Lotto Dominator. We'll be talking about how they're all similar, and what connection can be found there.

So without further ado, let’s get started.

The Lotto Dominator system is not really a system. It’s an eBook – one that claims to provide readers with lottery-winning secrets. It’s widely known to be written by seven-time lottery winner, Richard Lustig. (That might not be the case, though. More on that later.)

Anyway, Lotto Dominator is designed to work with any lottery out there. That means you can use Lotto Dominator to snag all the biggest jackpots – at least that’s what it claims to do.

What Is The Lotto Dominator Formula: The Method Revealed

Some of Lotto Dominator’s promotional materials advertise a surefire method for winning the lottery.

The idea is simple. You input the winning numbers from the last few draws, and run it through a formula to predict the most likely combinations for future draws. While it may not guarantee immediate success, you can use the same formula as many times as you’d like.

However, we can’t actually reveal the formula here. You’ll understand why in the next section.

Let’s talk about our experience reading Lotto Dominator. The moment it loaded up, it became immediately apparent that not a lot of care was put into writing this thing.

The entire eBook is 181 pages long, divided into 20 chapters, and is all very difficult to read. Formatting is inconsistent, fonts are all over the place, and navigation is a complete nightmare – especially if you like jumping to different chapters.

As for the actual content, it’s just as bad.

There’s some helpful tips to be found, but none of them represent anything novel. You can get all of the information elsewhere, and for free. 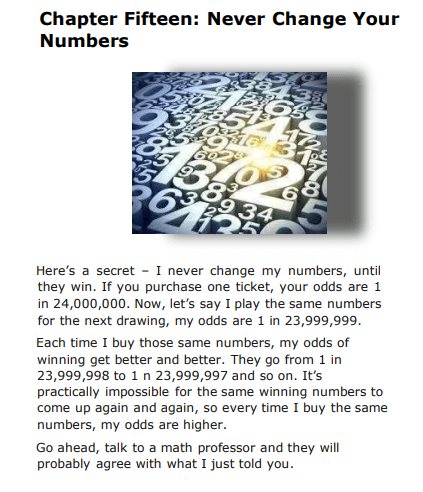 Some tips are contradicted in later chapters as well. In one section, the book tells you to use your winnings on more lottery tickets. Further down, it also tells you not to spend your winnings at all. Seriously?

Other tips seem to be there for no real reason. In one section, the book suggests that you meditate to increase your chances of winning. While we are firm believers that a clear mind does wonders for your quality of life, we fail to see the connection there.

That’s just one example of the amount of unnecessary fluff you’ll find. Even worse, a lot of its contents are recycled throughout the book – making multiple appearances in different chapters. In complete honesty, the entire thing could’ve been condensed to just a few pages.

And that supposed secret formula that this book advertises? It’s not even in there! Lotto Dominator doesn’t have a formula because – and we're sorry to burst anyone's bubble – it doesn’t exist. The eBook is just a bunch of random tips strung together to resemble something remotely readable.

The bottom line is that Lotto Dominator isn’t worth your money. If you really want to increase your odds of winning the lottery, take the money you would’ve spent on this eBook and use that on tickets instead.

So Is Lotto Dominator A Scam?

We did some digging around and it appears that Lotto Dominator is just another internet scam. We gathered some compelling evidence to lead to this conclusion, which we’ve highlighted below.

All of that, plus the fact that the contents of Lotto Dominator aren't useful and definitely not paying any significant amount of money for, we really don't recommend it.

As it turns out, Lotto Dominator is another typical cash-grab disguised as a legitimate product, designed to take advantage of unknowing customers.

If you’re still interested in checking out Lotto Dominator even after everything we’ve discussed, you might have trouble obtaining a copy. As already mentioned, the official website is closed, and the book isn’t available on Amazon anymore.

That’s why we’re providing you a link to a free copy via the official website. The website might be closed to new members, but the PDF can still be downloaded freely.

You can also check out our very own list of lottery prediction tools for some better alternatives.

In this new section, you'll find quick reviews of other similar software we've come across. We're very familiar with all sorts of lottery tools, and there's plenty we recommend checking out. For this part, however, we'll be going over ones that we advise you stay away from.

As mentioned earlier, Lotto Dominator has gone through multiple name changes already. Thus, it's only reasonable to assume that there are even more names that the software goes by.

And unsurprisingly, further investigation revealed just that. There are now numerous, similarly sold software that claim to do exactly what Lotto Dominator can. In fact, they're so glaringly alike, that you might think the same people were behind all of them.

Take a look at the legal notice on Lotto Dominator's official website. You'll see that it looks a lot like the others listed below. First off is Auto Lotto Processor, which seems to be the currently most popular iteration.

And just so we're clear, since these are all essentially Lotto Dominator clones, each app on this list is a scam, and definitely not worth spending any money on.

A quick look at the footer of Auto Lotto Processor's website shows some striking similarities. They've even added a legal disclaimer with the name Richard, which is a nice touch, but not really fooling anyone. Further exploration of the website reveals the same things we've discovered with Lotto Dominator before. It's more than enough evidence to make a quick judgment about Auto Lotto Processor.

We couldn't download a copy ourselves, but we expect the contents to be the same as Lotto Dominator's. The only significant difference is that this one costs less at $97, which doesn't really change our opinion about it at all.

Don't bother with this one.

Next is Lotto Annihilator, which started gaining popularity in 2019. This makes it the most recent incarnation of the Lotto Dominator clones, as far as we know. The similarities here are less subtle, to say the least. Their website is almost a carbon copy of the Auto Lotto Processor page.

It's pretty clear that this is the work the same group of people behind all the previous one's we've discussed. At this point, we decided not to look further as the same conclusions will likely be drawn.

For comparison, here is Lottery Winner University. This software entered the market years before all the other ones listed so far. It still has that same video and a very similar look and feel.

Finally, we also found the same website elements on apps like Lotto Profits and Lotto Crusher. Whatever it is these people are doing, it looks like they're not planning on stopping. At this point, it's only a matter of time until the next version of Lotto Dominator or Auto Lotto Processor appears.