In 2016, an incredible story about a Florida lottery winner became the talk of the town. Various online outlets ran with the story—and it got to a point that even bigger websites like Cosmopolitan and the Sun reported it. What was it about? Apparently, a 68-year-old lottery winner married a 24-year-old—only to find out that they were related several months after the fact! 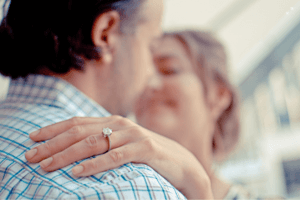 The story goes that after a 68-year-old lottery player from Florida—who wished to remain anonymous—won the $7,000,000 jackpot in the Florida lottery and settled down in a new waterfront home worth $2,000,000, he went on a quest to find a partner. See, he had been married and divorced twice before and, not wanting to live the rest of his life alone, he felt it was time for him to try dating again.

Determined, he tried out online dating for the first time. Surprisingly, it didn’t take him long to find that special someone on the internet (not so surprising if he described himself as a lottery winner though—but that’s none of my business). They chatted online, felt a strong connection, and the next thing they knew, church bells were ringing!

3 months after they got hitched and settled into their new life as a married couple, they found out an incredible truth. While flipping through the man’s old family albums, the 24-year-old wife was stunned to see her father in some of the photos.

Naturally, the woman thought that her new husband simply knew her father—or at least, some of her relatives—when he was younger. Maybe he was a friend of her family. Unfortunately, truth sometimes takes a strange turn. It turned out that the woman’s father was actually her new husband’s estranged son!

While most people would rethink their entire marriage right then and there, the pair were not like most people. Although the bride felt a sense of despair at first, she was quite adamant at making their marriage work. The 68-year-old millionaire echoed his bride’s sentiments, saying that he had no intention of failing yet another marriage. Admirable—if not for the fact that consensual incest in the state of Florida is punishable by law.

It’s easy to see why this story got so much traction that it even got reported by big websites. Who wouldn’t love a juicy story about a heartbroken old man winning the lottery, finding love, and eventually finding out his new bride is his own flesh and blood? It’s the kind of story that drives views, so it’s no surprise it became a trending topic in some circles for a while.

Unfortunately, it was a big, fat, hoax, and many fell for it—further proving that very few people bother fact checking anymore. In fact, if reporters back then bothered to check Florida’s laws and their lottery’s rules, they would have noticed that the story had two gaping holes in it. How about you? Did you spot them? Let’s examine them below.

Wishing to be anonymous:

First and foremost, the Florida lottery doesn’t allow lottery winners to remain anonymous so it’s hard to believe that—across various news articles—the man went unnamed. Sure, theoretically, he could have requested the media to keep his identity out of their articles, but sooner or later he would have been outed. It’s not like there are countless 68-year-olds who won a $7,000,000 Florida lottery jackpot and married his 24-year-old granddaughter, right?

Like I mentioned earlier, knowingly engaging in incestual practices is illegal in the state of Florida. Sure, one could argue that they didn’t know they were related when they got married. But, the fact that they decided to stay together after learning of their familial relations simply won’t fly in the state. If this story were true, then there would have been a big follow-up story detailing the couple’s trouble with the law.

Beyond the two red flags mentioned above, there were other signs that the story was nothing more than a hoax. That is, if you dug deep enough. That’s exactly what website The Daily Dot and a Twitter account going by the name Florida Man did.

The Florida Man Twitter account, which chronicles bizarre happenings in the state of Florida, pointed out that the website where the story first popped up—Florida Sun Post—was only created 3 days prior to the story being published. If that isn’t indication that something was up, I don’t know what is! 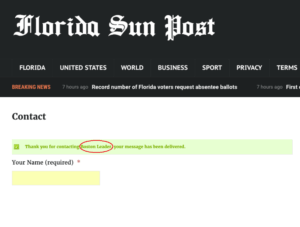 Apparently, The Daily Dot thought the same thing, so they dug even deeper. They decided to get in touch with the Florida Sun Post via a contact form on the latter’s website and—just like that—they hit pay dirt. After submitting their query, the contact form said, “Thank you for contacting Boston Leader.”

Why is that important? For those who don’t know, the Boston Leader was the same site that spread a fake news story about a Chinese zoo naming a baby gorilla “Harambe McHarambeface.” Put two and two together and…well, you get the idea.

But hey, if you still feel those aren’t convincing enough, then I have a bridge to sell you!